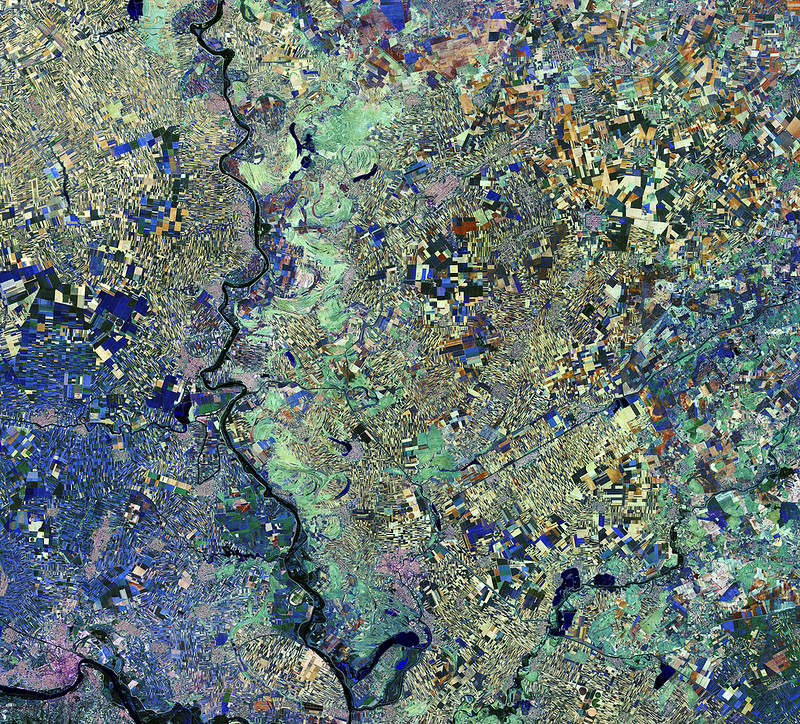 Vojvodina, Serbia
The Copernicus Sentinel-2A satellite takes us over northern Serbia to the region of Vojvodina.

The area pictured lies in the southern part of a region covered by the Pannonian Sea some 2–23 million years ago. Today, the land boasts a fertile soil – hence the plethora of agricultural fields visible as geometric shapes, reminiscent of cubist artwork.

The Tisza river snakes down from the north. Curved, brushstroke-like light green areas primarily along the east side of the river reveal its former course. Some of these areas are now used for agriculture, while others may still be too wet.

We can also see manmade waterways appearing as straight black lines – likely for draining the swamps, transportation and irrigation.

Nestled among the fields, there are a number of small towns with grid layouts. This type of city planning was invented by ancient Greece’s Hippodamus – known as the ‘father of European urban planning’.

The image captured on 28 August 2016 is clearly in false colour, and different colours indicate varying vegetative states. For example, yellowish patches indicate soil or freshly ploughed land, while shades of blue (primarily in the lower left) indicate either the same crop or different crops at a similar stage of growth.

Sentinel-2’s main instrument has 13 spectral bands, and is designed to provide images that can be used to distinguish between different crop types as well as data on numerous plant features, such as active chlorophyll content and leaf water content, all of which are essential to accurately monitor plant growth.

This kind of information helps informed decisions to be made, whether they are about deciding how much water or fertiliser is needed for a maximum harvest or for forming strategies to address climate change.

While this has obvious economic benefits, this kind of information is also important for developing countries where food security is an issue.

This image is featured on the Earth from Space video programme.